Accurate Leak and Line has built a reputation that matches its name, accurately detecting the source of customer drain and waterline problems. Providing full-service repair and rehab services, including epoxy lining for both drain and potable lines, has propelled the business to major expansion in the Texas market.

When Scott Montgomery graduated from Texas A&M University in 1998 with an engineering degree, he joined an engineering firm where he specialized in leak detection.

“I would go out and diagnose subslab leaks, run plumbing diagnostics and perform soil sampling tests, usually for insurance reports,” says Montgomery. “I founded Accurate Leak and Line in Dallas in 2002 based entirely on offering leak diagnostic services business-to-business, largely to plumbing companies.”

Montgomery partnered in the new venture with his two brothers, Chad and Josh, with all three partners holding Texas Master Plumbing Licenses. 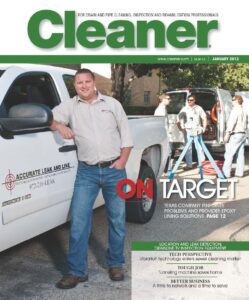 “We switched gears in 2003,” says Montgomery. “I realized it was a waste of time concentrating on this specialized diagnostics field alone because there’s only so much call for it. Most of the money was in repair and rehab and we weren’t doing ourselves any favors by locating leaks for everyone else so they could fix them.”

Most buildings in Texas are constructed concrete slab-on-grade with the drain line buried underneath the slab, where expansion and contraction of the clay soils can cause line damage. Location and construction of potable waterlines varies from city to city.

“In the Dallas-Fort Worth area, plumbing runs underneath the slab,” says Montgomery. “Why would they put the plumbing under the slab, instead of through a conduit or in a crawlspace? That’s a question we often ask ourselves. In Austin, waterlines run under the slab and are made of copper. In Houston, most potable lines are made of galvanized steel and run through the ceiling or attic.”

Traditional problems with commercial copper pipes include copper etching, algae and lead deposits, which often cause pinhole leaks. Galvanized waterlines begin to deteriorate quickly and can be blocked by heavy tuberculation in a matter of years.

“But it may take a long time before you know something is wrong, especially subslab,” says Montgomery. “People are tipped off by higher than usual water bills, repetitive slab leaks, rusty water, low-pressure water and structural damage that lets them know they’ve got a problem.”

In Texas, sanitary systems leak, back up or fail due to aging lines, root intrusion, calcification and ground or foundation movement. The first symptoms of a sanitary line leak include water protrusion from the slab or ground, stoppage or backup of services, foundation movement or cracking, or unexplained odors, but in most cases, customers call the company when the extent of the problem is already significant.

Potable waterlines are located using electronic detection. The operation begins with the use of the Detectron Model XL-2 (Pulsar 2000) fluid leak detector to listen for the sound of leaking lines. Once the general area of the leak is narrowed down, technicians use a Pulsar 2000 Line Tracer system that identifies lines by inducing a small electric charge through the pipe across two leads – one at the meter and one farther along. A wand passed across the floor traces line locations. The team then listens for leaks using geophones.

Drain lines are hydrostatically tested using a series of test balls, moved into place and inflated inside the lines by a rigid air hose.

“We first inflate a test ball in the main drain line, then fill the system to the slab level and shut the water off,” says Montgomery. “If the water level starts dropping, we know there’s a problem.”

The team continues to isolate segments of the system, introducing test balls of various sizes through toilets, traps, cleanouts, drains and roof vents. The fluid leak detector is also used and followed up with an inspection camera to pinpoint leaks in isolated areas.

Under the diagnostic-and-repair business model, work is split evenly between residential and commercial clients, including apartment buildings, condominiums, shopping centers, and strip malls. Business-to-business diagnostics-only jobs are limited to less than 20 percent of volume.

“We started out offering traditional dig-and-replace repairs,” says Montgomery. “That included tunneling underneath the slab, breaking the slab for isolated repairs or rerouting the plumbing or drain system. But in 2005, we expanded into epoxy drain pipelining, which really pushed the business along. When you tell a customer that you’re either going to have to bust the slab to fix their problem, or do it nondestructively with epoxy, they tend to go with the nondestructive solution.”

The company licensed with Nu Flow Technologies, which supplies them with their epoxy barrier coating system and products. Using the system, the drain line is first cleaned using the proprietary Scorpion Cutter, a high-torque air-driven 28,000 rpm chain cutter that can clear and ream lines of varying diameters.

“Running off high-volume air, the Scorpion Cutter is much more effective and the pipe preparation process achieved much faster than with traditional cutters,” says Montgomery.

The cutter includes a mount for the company’s RIDGID camera inspection system. Once the camera reveals that the cutter has done its job, crews jet the line clean and begin the relining process.

An epoxy-impregnated felt liner is inserted inside the line and held in place by an inflatable bladder, creating an epoxy coating 1/8- to 1/4-inch thick. Accurate Leak and Line has found the repairs equally effective on PVC, concrete, clay and cast-iron drain lines.

Epoxy repairs soon began to drive at least 75 percent of the company’s business, leading to rapid expansion. Montgomery hired three additional pipelining technicians in 2005 and hired another four in 2009. Along with the additional high-tech employees, the company expanded its excavation and tunneling crews. In 2009, the company also added three locations serving Austin/San Antonio, Houston and Tyler. The company’s corporate office is currently located in Gun Barrel City.

“With offices at each of these locations, we’re able to handle demand over the vast majority of Texas, serving clients as far south as Corpus Christi and north of Dallas-Fort Worth,” says Montgomery.

With the Texas territory expansion, the company recently entered what it saw as an untapped market for a potable water epoxy lining product.

“Although it’s been available for about 20 years, smaller diameter potable pipelining was very rare in the area,” says Montgomery.

The system was developed by the U.S. Navy and patented by Nu Flow, which currently holds distribution rights to the technology.

The company now fields dedicated epoxy relining teams at each of its locations, one for potable lines and the other for drains.

“It requires considerable expertise to get this right,” says Montgomery. “First, the line is cleared of algae or tuberculation using an air-driven sandblasting process. When you have a pipe that’s nearly full with tuberculation, you need to gently cut through the debris and clean out the pipe one section at a time so that the loosened material doesn’t completely block out the line.”

The air is driven through the system at between 375 and 1,600 cfm, depending on the diameter of the pipe and the length of the system.

“Even on condo or apartment buildings with complex curves and 90-degree angles, the abrasive sand is distributed by a complex manifold/valve system to manipulate it where it needs to go,” says Montgomery. “Once we dry the lines, we can coat the entire system at once using the air-driven epoxy coating system. It’s a different system than the one used to reline drains, which may require you to isolate and reline one segment at a time.”

With a full range of options available to the client, from tunneling underneath the slab, to slab-cracking spot repairs, full-line rerouting or replacement and epoxy relining, Montgomery leaves the final choice of how to deal with the problem to the customer.

“But we’re not shy about promoting the use of the epoxy rehabilitation system,” says Montgomery. “We point out that even if we fix one leak using traditional repairs, another is likely to follow soon after. With epoxy coating, the treated portion of the system is guaranteed not to leak for 10 years. That’s usually the way the customers choose to go, but we’ll provide whatever service the client asks for to get the repair contract.”

The company uses some limited advertising, and direct personal solicitations to engage customers, but its website is its greatest marketing tool with more than 50 percent of work generated exclusively from Web hits. The site features Web animations, complete with audio, that explain the company’s procedures precisely.

“We have a really good Web designer, Edgar Pitts with Design & Technology Consulting Services in Dallas, and we count on him to keep the site interesting and informative to visitors,” says Montgomery.

“You’re charged for a click whether or not you get a customer,” says Montgomery. “But even at up to $5,000 per month in click fees, the service generates enough business to work for us.”

Montgomery says he wants to see the company expand geographically over the next five years to more fully supply underserved markets in Texas.

“We’ve got the technical expertise perfected,” says Montgomery. “Now we need to bring that service to more customers.”