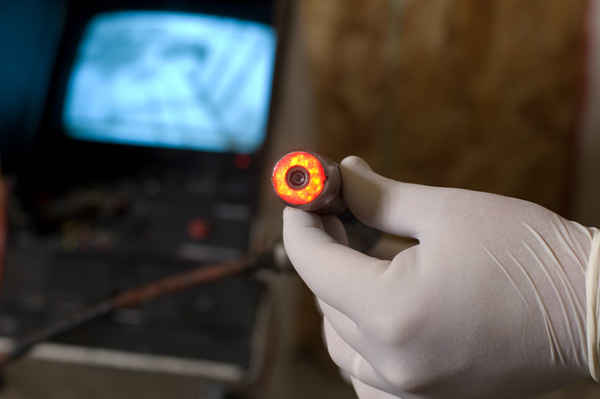 In-line video cameras are used to visually inspect sanitary sewer lines for defects or failures within the piping system. The system is accessed by camera via accessible cleanouts, roof vents, exposed drains, etc. A transmitter inside of the camera head allows us to pinpoint the exact locations of sewer lines or damaged underground piping from above. Cameras are also used to assist in the placement of test balls throughout a sanitary sewer system when performing static leak isolation testing.

Water meter movement is used to observe water usage or water loss within a domestic residential or commercial potable water system. Water meter movement can also be used throughout the isolation process as well as opposed to a water pressure gauge drop if water meter movement exists. A water pressure gauge is placed on a faucet or fixture connection. The Faucet is turned on to pressurize the gauge. The water meter is then turned off and the pressure on the gauge is observed. No loss and pressure indicate no leaks in the pressure system. A loss of pressure indicates leaks in the water piping system. Isolate the toilets at shut-off valves and irrigation at the check valve. Retest the system. If the system pressure test continues to fail, isolate the house system from the yard mainline at the house shut-off valve if one exists and isolate the hot water system from the hot water heater shut-off valve if one exists. If the pressure drop is indicated below the foundation continue with electronic leak detection and proposals for repair. If a leak exists on the yard main provide a proposal to replace the yard line from the meter to house, if irrigation, call an irrigation company.

Get In Touch Now

For questions or to schedule an appointment with professional plumbers